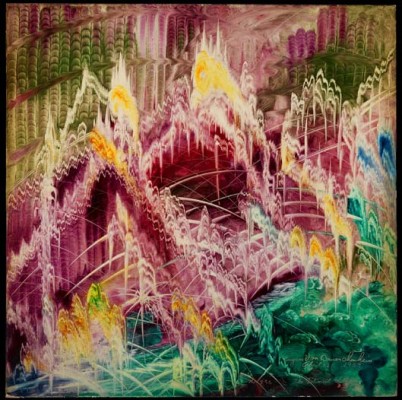 WHO ?? Be prepared to be astounded and amazed by this quirky work created by a strange man. The show of work by Eugene Von Bruenchenhein was a total surprise and joy for me when I visited the American Folk Art Museum. The show continues through October 9th, 2011 on 53rd Street next to the Museum of Modern Art.

He built sculptures from turkey bones, made pinup photographs of his wife, created ceramic sculptures, drew complex ballpoint pen precursors to spirograph art, made books, built furniture, and arrowheads, and….

from the American Folk Art Museum website:
“Eugene Von Bruenchenhein: ‘Freelance Artist—Poet and Sculptor—Innovator—Arrow maker and Plant man—Bone artifacts constructor—Photographer and Architect—Philosopher’” focuses on the formal leitmotifs of leaves and floral patterns as organizing principles in Von Bruenchenhein’s multidisciplinary oeuvre. The exhibition highlights the evolution of these forms from the fabric and wallpaper featured in the early “pinup” photographs of the artist’s wife, Marie, to hand-built ceramic flowers, vessels, and crowns. These ideas are further abstracted in vertical chicken- and turkey-bone towers and thrones and in paintings of spires, castles, and visionary buildings. The installation culminates with a book of drawings housed in a wallpaper-sample book and 34 rarely displayed ballpoint-pen drawings, unifying the two structural strands. Made in the early- to mid-1960s, those works range from studies of arabesque curves to architectural designs.

Eugene Von Bruenchenhein (1910–1983) was one of the most complex and multifaceted American self-taught artists. Born in Marinette, Wisconsin, he was from an early age self-identified as an artist. Over a 50-year period, between the late 1930s until his death in 1983, Von Bruenchenhein produced expansive bodies of work in poetry, photography, ceramics, painting, objects made from chicken and turkey bones, and drawing. This exhibition marks the first New York museum presentation of his work across all disciplines. Organized by guest curator Brett Littman, executive director of the Drawing Center, New York, it comprises approximately 100 objects culled primarily from the American Folk Art Museum’s extensive holdings, as well as loans from several private collections.

A collector’s website of Von Breunchenhein’s paintings has some great examples of his work.

p.s. you can still get a Deluxe Spirograph !