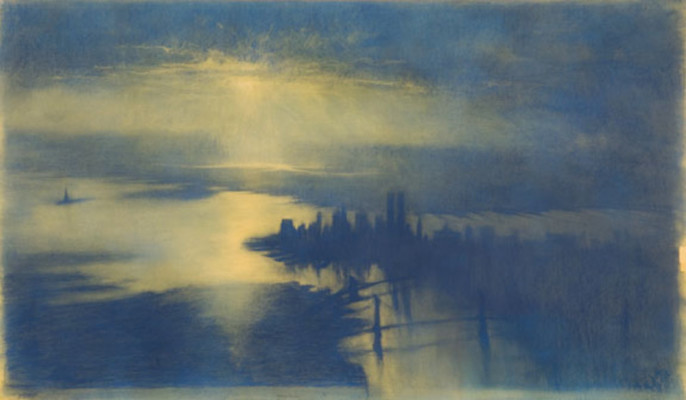 You missed it! But I caught the show at the last minute: Herbert Katzman’s dramatic paintings of the landscape of New York City at the Museum of the City of New York.

from the mcny.org website:
Herbert Katzman (1923 – 2004) produced some of the most lyrical, contemporary representations of New York City, his adopted home since 1950. This Chicago-born painter first came to public notice in 1952 when Dorothy Miller included him in her seminal Museum of Modern Art exhibition Fifteen Americans along with the work of leading Abstract Expressionists such as Jackson Pollock and Mark Rothko. Katzman eschewed the prevailing mid-20th-century trend toward abstraction. Much of his work bears a resemblance to Whistler and members of the Hudson River School. Other works emphasize the inky blackness of the harbor at night or brilliant reds, oranges and purples of New York at sunrise and sunset. New York’s waterways, atmospherically veiled in sunlight, mist, or rain, are a predominant subject for Katzman, and the city’s familiar bridges, skyline, and landmarks figure prominently in his work.

The show may be gone but you can always see his work in the book:
Glorious Sky: Herbert Katzman’s New York

Katzman’s paintings are a must-see for anyone who loves New York.