A wonderful feature on the Lenscratch.com website and Lenscratch Daily about Borderlands! It was exciting to get the attention and amazing how many people emailed, called, texted.. and got in touch. Old friends and new, we have a great community in the photo world!

Thanks to Aline Smithson for the thoughtful write-up. – article below 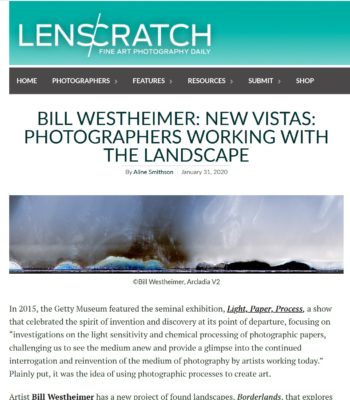 In 2015, the Getty Museum featured the seminal exhibition, Light, Paper, Process, a show that celebrated the spirit of invention and discovery at its point of departure, focusing on “investigations on the light sensitivity and chemical processing of photographic papers, challenging us to see the medium anew and provide a glimpse into the continued interrogation and reinvention of the medium of photography by artists working today.” Plainly put, it was the idea of using photographic processes to create art.

Artist Bill Westheimer has a new project of found landscapes, Borderlands, that explores similar territories. The title describes vistas and boundaries, but it also describes the physical origins of the photographs–on the borders of wet plate images. By shifting how he sees the marks and mistakes of historic collodion processes, he has created new worlds and new landscapes. His work is currently on exhibition at PhotoLA at the Imlay Gallery booth.

Landscape photography is as old as the medium, and the earliest photographers used the collodion wet-plate process to capture the grand scale of nature revealing it to the masses. As earth is but a speck in the vastness of the universe, the smaller scale and familiar earthly landscapes make humans feel insignificant. Size and scale are relative, whether it is man in comparison to the universe, or the tiny margins of a photograph relative to an imaginary earthly landscape.

Borderlands is an exploration of panoramic landscapes derived from small areas cropped from the edges of contemporary collodion wet-plate images. The images are appropriated by the artist from his own glass plate negative created for other projects. The hand-made nature of the wet-plate process creates artifacts which take on other worldliness when enlarged and viewed out of scale. They appear to be vast landscapes but in reality are just inches across. In Borderlands the historic collodion process inadvertently creates the vast imaginary landscapes discovered by exploring the edges of the hand made images. The images are enlarged and printed using contemporary digital printing technology unlike the 19th century photographers who could only make prints the same size as the original negatives.

A born experimenter Bill Westheimer was raised in Cincinnati and began playing with photographic processes at age 14. He was introduced to the magic of the darkroom in the mid 1960’s and has never looked back at the conventional, average, normal, and routine approaches to image making.

Beginning with a darkroom in a 3rd floor bathroom, Bill mastered developing and printing black and white photographs in his teens. He experimented with making 3-D holograms before he could drive. Bill also explored high contrast image making, solarization, and other alternative processes in those early years.

At Union College Bill studied philosophy and art. He studied with noted painter and educator Arnold Bittelman. Westheimer also studied scientific photography techniques while at Union. He continued with his experiments in photography while completing college.

Later Westheimer studied with Jerry Burchfield who introduced him to color photograMs and Cibachrome (now Ilfochrome) printing. Bill went on to teach Cibachrome printing at Colorado Mountain College in Aspen. He was a volunteer and member of the Board of Directors of Mountain Rescue Aspen during the ten years he lived in Aspen. Early in this millennium he learned the 19th century technique of collodion glass plate photography from the leading experts in the field: France Scully and Mark Osterman.

Bill lives and works in West Orange, New Jersey in a converted 1885 carriage house that includes a modern darkroom and digital printing studio.

Recent work includes modern fossils of photograms printed on slate, 3D printed book sculptures, photograms made on collodion glass plates, Ilfochrome and gelatin silver media. He collaborated on a camera obscura project with Charles Schwartz documenting the city of New York, and published the book Manual – The Personalities of Hands. He collaborated with Leonard Seastone of Tideline Press to create limited edition artist books of The Manual Project and “Crickets” a handmade limited edition book of salted paper prints with an ambrotype photogram bound in the cover. His

Posts on Lenscratch may not be reproduced without the permission of the Lenscratch staff and the photographer.