“Photographs do not lie” …. but then again, they don’t tell the truth either. I like to say that and I love to make pictures that don’t tell the truth. A good example is my Borderlands series. They appear to be panoramic landscapes. But they are actually gigantic enlargements of the artifacts on the edges of collodion glass plates.

I learned the wet-plate collodion process in 2001 when France Scully Osterman and Mark Osterman gave a workshop for six friends at my studio. It was a great example of taking my grandmother Gladys’ advice. She liked to say “I always have more fun saying “yes’ than saying ‘no’.” And in this case my friend Dana Buckley had suggested doing this workshop to learn “wet-plate” at my studio. I didn’t know what she was talking about but I said “yes” and we went ahead and invited 4 other friends to participate. I was hooked after that weekend workshop and quickly I found myself making lots and lots of wet-plate pictures.

Because it is a hand-made process there are lots of artifacts (aka “defects”) on the plates. The edges have a distinctive look, and usually in one corner of the plate is a fingerprint from where the photographer held the plate when pouring the collodion – as shown in this old engraving.

Over the years I have been fascinated with those fingerprint corners. I noticed them when scanning and retouching the plates, that many of them were quite beautiful. Not only did they reveal the process, but possibly the identity of the photographer, and then there are the artifacts of scanning which result from the light refracting and adding color. There is no color in the raw collodion wet plate – these are monochromatic until the scanner works it’s magic and adds a new “defect” (aka “artifact”.)

For years I knew that I had to crop these corners and enlarge them for a “new” series of large scale digital prints. So I started in on it and discovered that the corners were nice, but what was really interesting were the long edges of plates which look like landscapes.

the bottom became “Portragonia” here is a section:

So I started in on the project with gusto. I selected plates with lots of artifacts and began cropping and adjusting curves, adding a border when needed, and then making work prints. 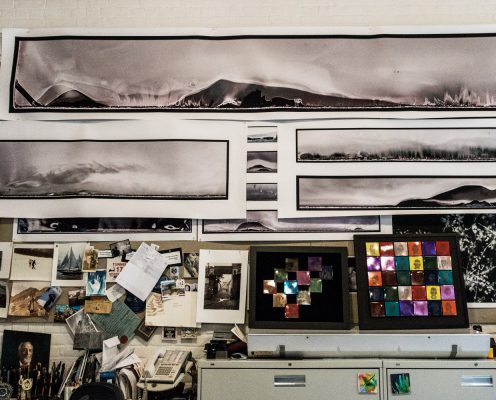 Once I had a bunch of images I sat down to figure out titles. They looked like landscapes, but they were fictional so they ought to have fictional names that seemed real too. I made a list of real places and then tweaked the names to be familiar, but wrong. “Patagonia” became “Portragonia”, “Los Angeles” became “Las Vingeles” and on and on…

So far I have done 24 of them, but there are hundreds of scanned plates with great edges, sometimes more than one good edge on a single plate. So there will be many more. And they have been well received, with shows in Jersey City at Art House Productions and two shows in Denver: Hinterland and Mike Wright Gallery.