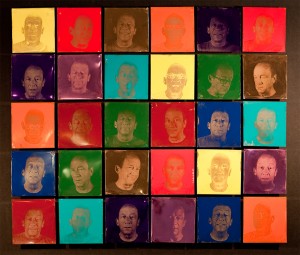 My self portrait made of 30 3″x3″ tintypes is in the show “Portraits: Beneath the Surface” at the Studio Montclair Gallery at Academy Square, 33 Plymouth Street in Montclair, NJ from May 18th to August 14th, 2012.  The opening reception is Friday May 18th from 6-8pm and will be part of the annual Montclair Gallery Walk event.

“Portraits: Beneath the Surface,” curated by Janet Boltax, encompasses a broad interpretation of what portraiture is. Artworks in the exhibit span a wide range of media and extend from traditional to contemporary art. According to Webster’s dictionary, a portrait is a likeness, a painted resemblance, or that which is copied from some example or model. Yet today, technology is transforming both the medium and subject matter of portraiture, as well as how we think of human identity. To portray the essence of a person, do we focus on the face? The DNA? How much of the artist’s nature should be reflected in a portrait?

Boltax believes that a compelling portrait should reflect the character and inner life of both the sitter and the artist. Several portraits in the exhibit are autobiographical—the many faces of photographer Bill Westheimer, the torso of sculptor Monica Litvany, expressive of the hardships she has endured due to physical illness, and the witty representations of Ruth Bauer Neustadter’s inner life. More traditional are the drawing and paintings of Brian Stymest, and the paintings of Andrea Geller, all exuding sensitivity, strength, and a skilled hand. In the vein of the great expressionist painters is the work of Paul Weingarten and Alaine Becker. Neil Korn’s drawings merge traditional draftsmanship with experimentation, his use of crumbled paper adding unexpected interest to his work. Monoprints, assemblage, and photography, both traditional and computer-based, further expand the parameters of portraiture.

“I believe that one thing all of these portraits have in common is the capacity to illicit feelings of awe and wonderment and that slightly unsettled feeling that comes with perceiving the world in a novel way,” says Boltax.

Janet Boltax is a portrait painter, figurative artist, and printmaker. She has had several solo exhibitions in New Jersey and Virginia and her work appears in private collections throughout the United States. She also teaches painting to adults at the Montclair Museum, the Newark Museum, the Adult School of Montclair, and Studio Kids Art, and mixed media to children at the JCC of West Orange.