On January 24, 2019 my dear friend Charles Schwartz died. He had been sick and incapacitated for years, so his death was bittersweet. He was released from a personal hell being imprisoned in his crumpled body. May 21st, 2019 a memorial was held at the Explorers Club in midtown Manhattan where Charles had once been a member. I spoke about knowing Charles and the text is below.

Hi everyone, In case you don’t know me I am Bill Westheimer. I collaborated with Charles photographing the images from his Camera Obscura.  I’m going to start with something obvious. Everyone here knows that Charles was a passionate collector.

As he retired from being a “milkman” he started with an obvious collection, maybe obvious to him, but a revelation to everyone else: vintage photographs of cows and pictures of milk trucks. When something interested him – and that was nearly everything – he pursued it passionately. Did you ever notice the sculpture by the stairs going up to his office? It was a crushed wire milk crate. Charles saw the beauty in everything. He saw beauty in the unloved damaged ambrotypes that became his Light Reclaimed work. He loved dogs – and vintage photographs of dogs. He was fascinated by Japanese photography – and by the Japanese woodblock prints depicting photographers taking pictures produced before anyone in Japan had a camera. He amassed daguerreotypes and tintypes of dead babies!

Charles and I met when my wife Lisa worked for him to get the Camera Obscura approved by the NYC Department of Buildings. When she told me about it I was wondering what kind of camera is a camera obscura? She introduced us and that was the start of a wonderful friendship.

When he heard I like to try unconventional ways to make pictures he invited me to experiment with the Camera Obscura. I started out working by myself making exposures of the camera obscura images on 16×20” sheets of black and white paper, putting them in a box and running down the hall to develop them in the bathtub. As I thought about making pictures with the camera obscura it seemed that it would be a one day affair and that would be it. After all, how many pictures can there be if you can’t move your feet? It turns out there are a helluva lot of pictures available from THAT one spot. We worked together for five years photographing the images from the camera obscura and never took the same picture twice. Just like the view from the Camera Obscura – my friendship with Charles was always surprising me with something new.

Every time we were together there was something new, something different, delightful, and a surprise.  When I showed up to work Charles would bring me in his office and before we could take pictures we would go over to the flat files and he would show me a new acquisition that he was excited about. It was always something quirky and wonderful. Just like Charles. His boundless curiosity led him to collect things that no-one else ever thought much about. Double Vintage! Japanese propaganda photographs! Photographs of Photographers! 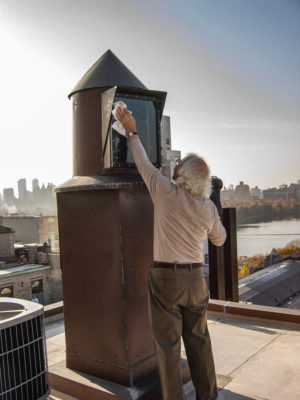 Charles taught me about the history of photography. I knew technical stuff about how to make pictures but I was totally uneducated about the early days of making photographs. It is embarrassing to admit I hadn’t even heard of a Camera Obscura before entering Charles’ world. Charles shared his understanding of photography and how it affected culture, he shared his insights into the world of art photography, I learned so much from him – that was the way he was – generous, kind, funny and a mensch.

He was imaginative – every time I arrived to collaborate with the camera obscura he would have a new crazy idea. Once it was ping pong balls, another time he wanted to focus the sun on the table to make the paper smoke and burn. There were post-it notes on the table, folded or crumpled sheets of paper, even a schmatte. If I came up with a crazy idea he was enthusiastic. I feel very fortunate to have had those times with Charles.

Charles collected ideas too. When he found a photograph he researched it thoroughly. Who or what the subject was, when it was created, the provenance and history. His clients knew that there was always a great story behind the pieces that he sold. When I started helping Charles at his AIPAD booth I was awestruck by how excited he got talking about the work. His descriptions and explanations made it hard to leave his booth empty handed. I heard many people comment how his booth always was the most surprising and most interesting at AIPAD.  People would come by his booth just to see him and talk with Charles.

Charles collected experiences too. He went to Antarctica to count penguins, Africa, Iceland… he was a real explorer and adventurer.

Finally I want to mention Charles’ most important collection – the one he was most passionate about – it was his collection of family, friends, colleagues, clients, and associates. Look around this room and enjoy Charles finest work of art – his community. While we will deeply miss him he will always live on in how he touched every one of us.