Being the naive person that I am, I am always amazed when I encounter someone who is dishonest. I know, in today’s political world it seems like there is an epidemic of dishonesty and hypocrisy, but in the art world I innocently expect the best from everyone I deal with. And most of the time people are straight-up stand-up honest and honorable folks. But every now and then I hit a clunker: a creep or a really bad person that makes me scratch my head and question my trusting nature.

I am also a person who doesn’t take crap lying down. If something isn’t right I try to make it right. Not revenge, I am not interested in revenge, I simply want truth justice and the American way – I need Superman to defend right from wrong. I’ve learned that one of the most power tools in business is to take notes when I deal with someone or a company. This helps me remember things accurately and helps if something goes wrong. I usually take notes on paper and then transcribe them into note taking software.  I used to use Infoselect, but when that went defunct I was able to import my thousands of notes into Evernote.  I highly recommend Evernote – it is a free form database and easily searchable. It works on multiple platforms, has good security features and stores your info in the cloud so that it is always available anywhere you have internet access. It also has Android and iOS apps.

This is a long story, long in the sense that it began in 2006.  Back then I received an email from a woman Elizabeth Weiner who said she was interested in representing me for her “Elizabeth Weiner Gallery”. I responded with links to my website and a few questions about her gallery. There was no answer. No problem.  I have notes… 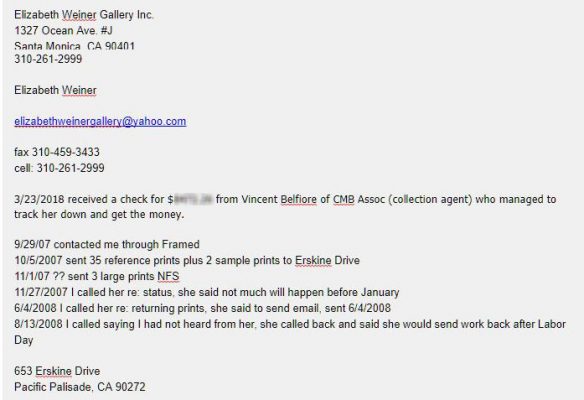 Nine months later, September 29, 2007 she contacted me again, not acknowledging our earlier communications. She saw my work in “Framed” – a source book for fine art photography published by Workbook.  We spoke on the phone and I agreed to send her some 8″x10″ reference prints that I marked not for sale, just to give her an idea of the images. A month later I sent her some large prints which were also marked NFS.  We spoke a few weeks later and then about 7 months later, and finally after 9 months of no action and difficult communications I asked her to send the work back. That was the last time I was able to reach her.

From the start I wasn’t sure about Ms. Weiner, I got a strange vibe from her and now I wished I had listened to my intuition. I even googled her to see what a search would turn up, but there was nothing on her. So when I realized I wasn’t getting paid for my work I was pissed and I wanted truth and justice….. and my prints back. I needed Superman to defend Truth, Justice, and the American Way..

When my wife Lisa had a construction consulting business in New York City she encountered more than her share of deadbeats who tried to screw her out of her hard earned fees. The construction business seems to attract the ethically challenged. She didn’t lose much sleep over it because she simply handed it off to her collection agent and eventually got paid. There was the little bonus – satisfaction knowing the deadbeats had to deal with the collection agent and then still pay up. “Vinnie” – Vincent Belfiore of CMB Associates of Brick NJ was a real pro – very effective, totally honest, legit and professional, and he always was able to get the money. He earned every cent of his commission. So when Elizabeth Weiner disappeared with my prints I called Vincent thinking how happy it would make me to know that she would at least be made miserable and would probably have to pay up. Even if I never got the money it would be worth it.  But I wanted to make sure Vincent got paid, even if I didn’t. That would be justice. And if anyone could collect what I was owed it would be Vin with his 30+ years of experience. He has done work nationwide and knows the ins and outs of the collection business.

Vin took it on with gusto.  It was as though he took it personally that someone would try to cheat Lisa’s husband. He tracked Weiner down through various addresses, he called me excitedly one day when he found her new address in Santa Monica, and even showed me on Google Earth where her house was located. She lived large, this was an expensive house in a fancy neighborhood. But sadly he said it would be hard to attach her California assets for a New York judgement.  A few years later I was surprised when he called to say he tracked her down to a new fancy address in New York City. Now we could use the NY judgement against her and attach her New York assets. Yippee! I was amazed that Vin kept pursuing her all of these years. A lesser man would have given up, but not Vin.

Every few years I would get a letter from Vin saying we needed to pay a modest filing fee or a small legal bill, and I always paid up. If he was going to diligently and doggedly keep after this crook then I sure wasn’t going to give up. I got a warm feeling in my heart every time I thought Elizabeth Weiner had to deal with Vin. Don’t get me wrong, Vin is a sweetheart…. unless you owe someone money.

It had been a few years since I had heard from Vin about the case. We kept in touch socially via Facebook, so I knew he was well. Then I received an envelope from Vin. I thought he was probably writing to say he was going to give up or maybe there was another filing fee.  But lo and behold… A BIG FAT CHECK!  When I called Vin to thank him he told me Elizabeth Weiner was one of the hardest cases he ever handled.

So for all the people out there who don’t pay up it is great to know there are honorable hard working guys like Vin to set things right.